Home » Drones: the sky’s the limit for the UAV industry.

Drones: the sky’s the limit for the UAV industry. 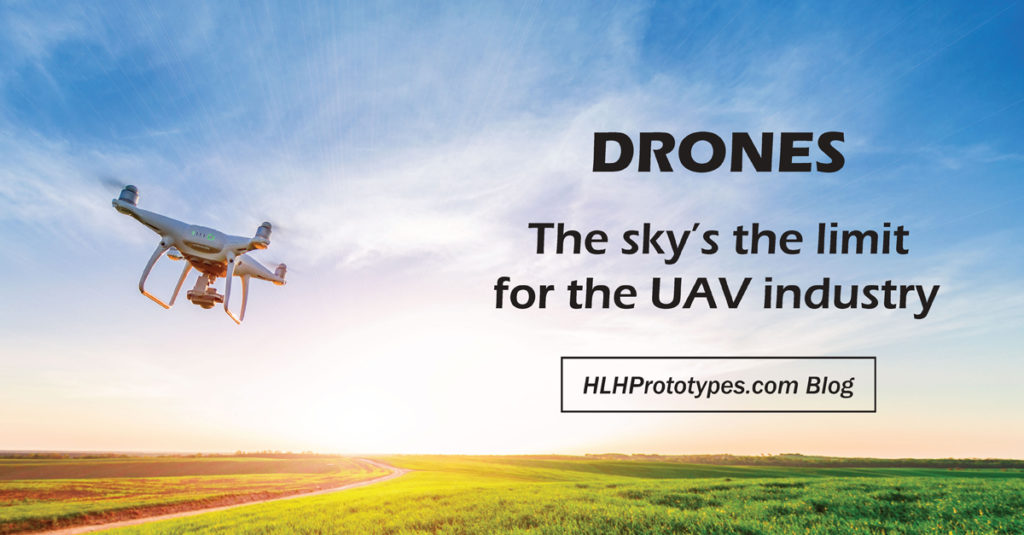 It was only a few short years ago that the word drone would conjure up visions of the military flying a mission in some far off land and while the primary users of drone technology today is still the military/police forces, the future of drones is set to explode across all market sectors.

So, why is this? Are drones the new disruptor? Is miniaturisation of technology driving drone investment and development? Are these new drones solving real world problems or just a luxury? How is rapid manufacturing driving the industry forward. What industry’s are pushing for drones as a big part of their future?

These questions all overlap with each other but let’s quickly look at some answers to each of the individual questions.

Are drones the new disruptor? I wouldn’t call drone technology a true disruptor like we have been accustomed to with an Uber or an Air BnB. But drones certainly disrupting the norms in many an industry and forcing companies to think about the possibilities or risk getting left behind.

Take any kind of vertical inspection work for example. Why put human lives at risk if a drone kitted out with the right technology can perform an inspection task for you? Looking at drones this way may translate to an adjustment in salaries or adjustments to insurance rates or a whole host of possibilities that did not exist prior to commercially available drone technology. Drones do disrupt the norms and have the ability to offer many market solutions where none existed before.

But it is not only the miniaturisation of add on technology that is driving the drone investment forward. It can be as simple as a battery that is lighter and more efficient that can bring a drone project to life, or components that are lighter and smaller via fabrication using advanced materials. It is all about weight with drones. Make the drone itself lighter through materials or miniaturised components/technology and that drone can fly farther and/or achieve a heavier payload. How to achieve a heavier payload? A big factor driving R&D in the drone industry.

Example, you have likely seen the video that shows how a drone can quickly deliver a defibrillator, as its payload, in the event of someone having a heart attack. This is drone technology solving real world problems.

As any new technology comes online and gets adopted there will undoubtedly be much more debate on the subject of helpful or annoying. Monetary gains, public opinion, and government regulations are set for a collision course.

How is rapid manufacturing driving the industry forward? Any new product, or newish in the case of commercially available drones needs fast development so one can establish their offer in the market first. Not always, but often, first to market wins and it takes something extraordinary to knock the winner off their pedestal. At HLH, we have made drones for customers using 3D printing, carbon fiber, CNC machining, vacuum casting, and injection molding. Each project is different, each customers needs are different, often times more than one rapid manufacturing service is required to bring a new design to fruition but all new drone projects need speed at the beginning, which is at the heart of rapid manufacturing.

A trend that we are seeing is the use of low-volume production runs for v1.0 to help fund the eventual final design. The ability to sell your early drone concept product offer directly to your end customer has never been easier with today’s online world. As a result, many customers are not just making 5 prototypes, instead they are quickly scaling up to 500 low-volume production pieces that they then sell to fund v2.0 of the product line.

What industry’s are pushing for drones as a big part of their future? I can’t list everything here in this blog but here are a few examples that shows a diverse range of industry’s getting into the drone game.

Above is only a drop in the bucket of industries that are right now using and will soon adopt drones as an everyday part of their business model. We expect to see a ten fold increase in drone project coming our way over the next 18 months as this industry continues to explode. Not all will win market approval but there is a tremendous amount of investment in the drone industry because of the potential financial upside. The UAV (drone) industry on wide scale adoption is only just beginning and the sky is the limit.

At HLH, we make things for you. FreeQuote@HLHPrototypes.com